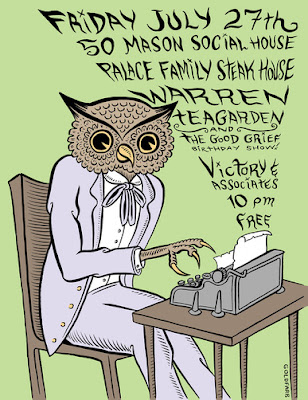 PFSH, Live And In Concert!

We're playing this Saturday at a fundraiser for KUSF in Exile. 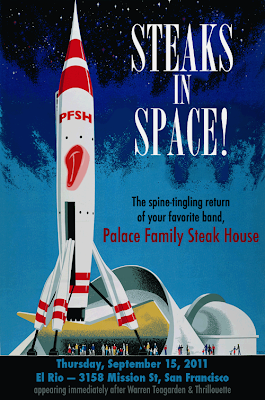 preceded by
Warren Teagarden
and
Thrillouette

Am I forgetting something?
Email: pfsh@palacefamilysteakhouse.com

Not at Palace Family Steak House!
Although you could eat there first.
Because, you know,
We're on last.

Show up early for
Thrillouette
and
Warren Teagarden.

(But again, not at
Palace Family Steak House.
Down the street from it
at El Rio.)

I will stop with
the poetry now.

PFSH Set To Reopen In More Ways Than One

Bernalwood is reporting that Palace Steak House will reopen!

In honor of this news, the Palace Family Steak House band (unrelated to the restaurant) will play it's first show in more than a year at El Rio, just down the street from the Palace Steak House, on September 15.

Wake Up, You Lazy Astronauts!

We submitted the song below for NASA's contest to pick the song that would wake up the astronauts on the final shuttle mission later this year. The public will vote to pick a winner. But NASA didn't even pick this song as one of the ones that could be voted on, which frankly makes me question everything about the space agency.

The song was written by Anu Kirk and Rich Trott with a line or two (and the whole idea of writing a song for the contest) suggested by Jessica Forys. The song is performed by Palace Family Steak House and features the Final Frontiersmen. Performers on the recording are: Anu Kirk, Rich Trott, JP Lester, Joel Primer, and Ted, Kelly, and Greg from the Final Frontiersmen.

The Joy Of Cooking Project has been inactive for long enough that I can call it cancelled. 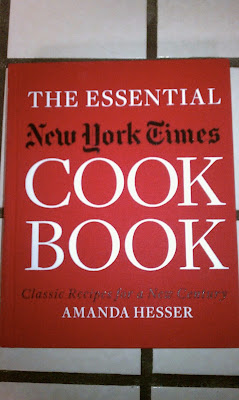